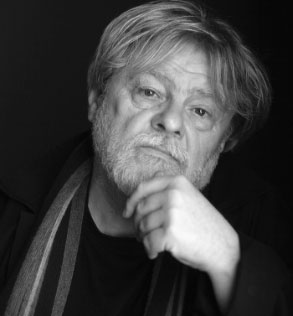 (Szekszárd, 12 October 1953 –) Kossuth Prize awarded Hungarian poet, playwright, author, editor, critic, founding member of the Digital Literary Academy. One of the most significant language artists of contemporary Hungarian literature, an emblematic figure. „Postmodern poet king” who occupies a dominant place in today’s Hungarian literature as a poet, a play- and prosewright as well as a literary translator.

He was born on 12 October 1953 in Szekszárd. He spent his childhood years in Tolna, Kaposvár and Székesfehérvár, he graduated from grammar school in the latter city in 1972.  He earned a degree as a teacher of Hungarian literature and History at the Teacher Training College of Pécs in 1977. After that he was a librarian at the Baranya County Library and from 1979, the editor Jelenkor, a journal of Pécs. He mentions in several interviews that Pécs played a major role in the process of him becoming a writer. In this context, we can highlight the role of the legendary Jelenkor editor, Ervin Szederkényi.

Lajos Parti Nagy started his career as a poet. His first book Angelstop (Angyalstop) was published in 1982, his second one was out under the title Wrist Exercise (Csuklógyakorlat) in 1986. The author’s sensitivity to language games and linguistic humour can already be traced in these volumes of poetry, culminating in the 1990 volume titled Soda Riding (Szódalovaglás).

The original text creation of Lajos Parti Nagy introduces itself in this volume, characterized by extreme language transformation, the use of distorted linguistic elements, twisting quotes from popular and elite culture, and the use of humour, irony and parody elements. In addition, a new kind of author perception also appears here: the poet is in the role of a craftsman as if he was re-kneading the language on a chopping board.

In 1990 an unknown author, Jolán Sárbogárdi published a short novel titled The Angel of the Body (A test angyala) in Jelenkor journal, to which Péter Balassa wrote a commentary. It shortly became apparent that the mask of Jolán Sárbogárdi covers the prosewright Lajos Parti Nagy.  The naive, dilettante tone of the short novel was coupled with devastating linguistic humour. It is not a coincidence that since the first, rewritten edition in 1997 it has been out three times as a separate volume, and that Jolán Sárbogárdi’s character was also included in the play Ibushar (Ibusár).

Following the Angel of the Body, from September 1990 at the request of Magyar Napló, Lajos Parti Nagy biweekly writes feuilleton stories: the collection Nether Drums, Nor Trumpets (Se dobok, se trombiták, 1993) is compiled from these pieces, and from the rewritten versions over half the short story collection titled A Swell on the Balaton (A hullámzó Balaton, 1994). The protagonist in the title piece  of A Swell on the Balaton is the outstanding representative of a particular sport, a „competitive eater”, whose recalls lead to unravelling the social and human conditions prevailing in socialist Hungary. It only becomes apparent from the last lines that the title „ A Swell on the Balaton” does not relate to the lake, the famous “Hungarian sea”, but the tons of biscuits well-known in Hungary as “Balaton bar” swallowed by the protagonist. The tremendously-sized protagonist later gulps these down together with their tinfoil wrapper and organizes a home championship.

The fourth poetry volume of Lajos Parti Nagy, titled Evening Chalk (Esti kréta) (1995) is a collection that contains new text in addition to the previous three poetry volumes. Of these, Fox Affair At Sunset (Rókatárgy alkonyatkor) is one of the highlights of Hungarian poetry of the nineties, postmodern death poetry, which incorporates the death motifs of Hungarian literature in its lines through its nostalgic irony. The Notebook (Notesz) appears as Attila József’s fictional diary in verse, and it is filed with a  network of hidden references to the poet’s poems and life. The text was created from the playful idea of what kind of verses the ageing  Attila József would have written had he not departed from literature at the age of thirty-two.

In the nineties our author not only published poetry and short story volumes, but also Ibushar-Mausoleum (Ibusár–Mauzóleum), a book containing two plays. The central figure of Ibusár, Jolán Sárbogárdi is a cashier at a rural railway station, who tries to write an operett, a “huszerett” in her free time. Extreme emotions appear in the wake of the tragic and comic scenes of lacking talent, while Jolán Sárbogárdi’s huszerett is also inscribed in the piece. The locale of the Mausoleum is a Budapest apartment building, where in the basement they are secretly trying to burn a criminal’s corpse.  This secret leads the plot, while the residents of the building also appear in front of us – they are all defenceless, fallen, vulnerable people. Mausoleum, together with its linguistic humour, is a social drama which leads its reader to the deepest levels of vulnerability. In addition to the works of the drama volume published in 1996, Lajos Parti Nagy’s name is also linked to two plays: Gauze Kiss (Gézcsók) pays tribute to the last days and last love of Dezső Kosztolányi, whereas the drama Jolán Sárbogárdi: The Angel of the Body (A test angyala, 1995) is the short novel’s drama version rewritten for stage.

We should mention that Lajos Parti Nagy has been a well-known and respected figure of Hungarian literature and translator of twenty contemporary dramas since the nineties to this date. These pieces were not only important for existential reasons for Lajos Parti Nagy, the freelancer writer living in Budapest since 1986, who also edited the poetry section of Magyar Napló literary journal, but also from the point of view that he exported his specific linguistic energy of his works to the field of literary translation as well. The majority of his drama translations are not traditional translations, rather rewritings, “megnyelvezés” or boosting by the tongue, a possible version, by which he provides each piece with a living, enjoyable language. A typical solution of these postmodern translations is the “Molière: Tartuffe, written by Lajos Parti Nagy” formula. If we wish to paraphrase a statement of Lajos Parti Nagy, we could say that although in this case the author is Molière, the writer of the piece is Lajos Parti Nagy.

Lajos Parti Nagy’s first and so far, only novel (not considering the short novel written under the mask of Jolán Sárbogárdi) is My Hero’s Square (Hősöm tere, 2000). The novel is a dystopia that reads itself on purpose as a political piece, and in it far-right pigeons take over power in Budapest. Most certainly this fact played a significant role in the rather critical reception of the piece, let alone its somewhat untraditional, experimental structure. My Heroe’s Square was published in German as well under the title ‘Meines Helden Platz’ in 2005, translated by Terézia Mora. Reference is also made here to the volume Europink (1999), which includes a selection of poems by Parti Nagy in Hungarian and their translations in German, English and French.

The poetry volume Grafitnesz (2003) that contains compiled and new poems as well presents an extremely rich, polyphonic lyrical oeuvre. The reception of the volume also reflected Lajos Parti Nagy’s place occupied in contemporary Hungarian poetry since such almost unsurpassable sentences were also written about Grafitnesz that suggest it to be the most significant poetry volume of the previous and forthcoming years of Hungarian literature.

Language takes the leading role in almost all of the poems by Lajos Parti Nagy. The uncontrollable elements of language in operation, linguistic slips, fractures and misses control the meanings of the text. These often appear before the reader in an ironic, parodic or comic form. Instead of language sterility, abstract, pure, untouchable material, the highlight is on free, playful, frivolous, spoiled meanings.  Overruning language use hierarchies, the ideal of a polyphonic and democratic poetic language appears in the volume. Patient and passionate interest in the diversity of voices is coupled with the bravery of language experimentation in the works of Lajos Parti Nagy. A most striking sign of this is the author’s sensitivity to masked poetical games. In these poetical games a complex linguistic space is created from the dilettante and the archaic language. In these parts of text Lajos Parti Nagy experiments with outdated forms that have become unwritable: he renews verse forms and salutations in a way that at the same time ironizes, parodizes and rules them out.

Within Grafitnesz the Autumnology Practices (Őszológiai gyakorlatok) cycle was published, the verses of which Lajos Parti Nagy was hiding behind the mask of a certain Endre Dumpf. In these hospital verses the language mass radically kneaded and reshaped by Lajos Parti Nagy, the distorted language meets disease, the deterioration of the body. The fact that hospital and death is presented by simultaneously dilettante and parodic use of language faces the reader with the radicality of Lajos Party Nagy’s verses: the parody of the scandal of death.

Sheaves (Mintakéve,2004), the volume published for Lajos Parti Nagy’s fiftieth birthday, indicates the very important place held by the author in contemporary Hungarian poetry, in which the best of contemporary Hungarian poetry wrote a wreath of sonnets to the author’s master sonnet. A year later, in 2005, the volume containing the most beautiful Lajos Parti Nagy poets was out. The short story collection titled A Frozen Dog’s Leg (A fagyott kutya lába, 2006) can be interpreted as the counterpart or continuation of A Swell of Balaton. It is necessary to draw attention here to the special relationship between the two title stories: the film Taxidermia (2006) directed by György Pálfi, that received  multiple Hungarian and international awards, was made based on the two referred short stories. The critical reception of the short story collections A Swell of Balaton, A Frozen Dog’s Leg and The Blind Marmot (A vak murmutér, 2007) supports the opinion that the author is also at the forefront of contemporary Hungarian literature as a prose writer.

To this date over 300 reviews or studies dealt with the works of Lajos Parti Nagy and more than 60 interviews or talks have been made that were published in printed form as well. The author is the winner of over 30 awards.