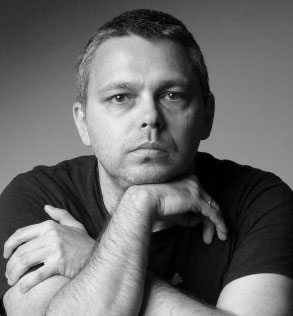 I was born in 1973, turned forty-four last year, I have been living in Hungary for almost thirty years; I left my birthplace, Marosvásárhely (Târgu Mureș) in 1988, I visited Transylvania two times, I felt so homesickn I could not sleep for days, I did not go any more, I slowly got used to being here, Budapest became my home. By the summer of 2005 enough time elapsed to feel I can visit again, it was a beautiful and liberating experience, an alien town where I know every street.

After emigrating I lived in Szombathely for four years, that is where I attended grammar school and met my wife, Anna T. Szabó. I married young, at twenty-two, Anna and I courted each other with writing, she wrote me a poem every day and I wrote her a short story every day, we were sixteen at the time, since then what changed is that my two sons, Gábor and Pál were born, and now we can write poems and stories for them, too.

I started writing at the age of thirteen, I saw a picture so clean and graphic that I felt I must write it down. I have been experimenting with this ever since, I decided rather early that I want to write novels and it took me ten years to figure out how to do it. I studied at ELTE majoring in English and Philosophy (meanwhile I was a member of Eötvös József Collegium and the Invisible College). After three years I gave up philosophy when I realized how much work a novel requires. I still finished English and the three-year PhD course as well and meanwhile, I was writing for five years, this was The Book of Destruction (A pusztítás könyve). It was published in 2002, the year in which my elder son was born. This fine tradition continued in 2005 when my second novel The White King (A fehér király) was published and my younger son was born.

The White King has since been published in over thirty languages, it is on the shelves of libraries from China to Brazil, and in 2016 a British-American movie was made from it starring Agyness Deyn and Jonathan Pryce. My third novel, the Bone Fire (Máglya) was out in 2014, a year later followed by Lion Choire (Oroszlánkórus), my first book of short stories (a selection of short stories from the last twelve years). I have two plays, Nihil and Galoshes (Kalucsni), the latter was staged in 2016 in Cluj-Napoca and in 2017 in Budapest. My writings our regularly published in Hungarian and foreign journals and magazines, like The Paris Review, Neue Zürcher Zeitung, Le Monde and The New York Times. I have regular columns in BBC GoodFood, HVG Pszichológia, Képmás, and on Qubit.hu, and I published regularly for years in ÉS, Népszabadság, Nők Lapja and ELLEMan. My writings have also appeared in Holmi, Mozgó Világ, Jelenkor, ÉS, Alföld, Kritika, Alibi, Héviz, Műút, Galaktika and many offline and online interfaces, I wrote / write to ELLE, Playboy, Marie Claire and Hamu és Gyémánt.

I also worked as a literary translator, the most pride I take in the Hungarian version of Samuel Beckett’s novel, Watt, however, unfortunately I seldom have time for translation these days, the last piece I made another translation of was Beckett’s Happy Days for Katona József Theatre.

The visual arts are important to me, I am often invited to exhibition openings. In such cases I write and read out short stories inspired by the art pieces.

I cook to relax.