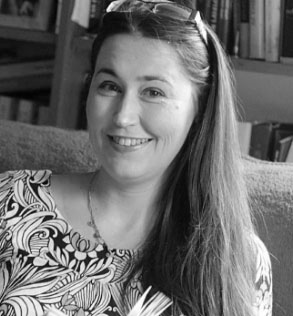 She was born on the fourth of June in Cluj Napoca and moved to Hungary with her family in 1987. She attended grammar school in Szombathely. In 1991, she was the student of Eötvös Loránd University in Budapest with Hungarian Literature and English majors, she obtained a degree as a teacher and lecturer in 1997, then completed the  English Renaissance and Baroque PhD programme. A member of, and later for a few months a teacher at Eötvös József Collegium. She started to publish during her university years, she published poems, essays and short prose in several daily and monthly papers and magazines. Her first volume was published in 1995 by Belvárosi Publishers, followed by three more volumes published by Magvető Publishing House (Gravity (Nehézkedés) 1998, Light ( Fény) 2002, Capturing Motion (Rögzített mozgás) 2004).

Writer, literary translator (translated among others the works of James Joyce, Sylvia Plath, W. B. Yeats, John Updike and Stuart Parker), did teaching and editing work for the British Council and the Hungarian Book Foundation, writes articles and reviews. Her poems have been translated into English, German, French, Dutch, Slovakian, Russian, Bulgarian and Romanian as well.  Currently working on her fifth volume, Leaving (Elhagy).