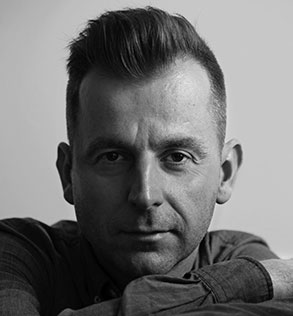 Krisztián Grecsó (Szegvár, 18 May 1976 –) József Attila Prize awarded poet, writer. He graduated from Batsányi János Grammar School in Csongrád in 1994. After Kőrösi Csoma Sándor University College in Békéscsaba, he graduated from József Attila University with Hungarian Literature major. From 1997 to 2006 the editor of Bárka, 2007 to 2009 the senior editor of the Hungarian women’s weekly, Nők Lapja, and between 2006 and 2009, the vice president of Szépírók Társasága (Hungarian society of writers, critics, and literary translators). Since 2009, associate at Life and Literature (Élet és Irodalom) literary and political weekly. His short story volume, Gossip Mum (Pletykaanyu) brought him the first succes in 2001. Following several reprints, the second, revised edition of the book was published in 2006 (by Magvető). His novel, Welcome (Isten hozott) was out in 2005 (Magvető), which was also published in 2007 in German, in 2008 in Czech, and in 2009 in Slovenian. His next novel, Dance Scool (Tánciskola) was published in the spring of 2008, and Room For You Beside Me (Mellettem elférsz) was in the bookstores in 2011.

Katona József Theatre staged Gipsies (Cigányok) in 2010. The first part of the show presents Józsi Jenő Tersánszky’s piece, which is further rethought and updated by Krisztián Grecsó in the second part.

He currently lives in Budapest.