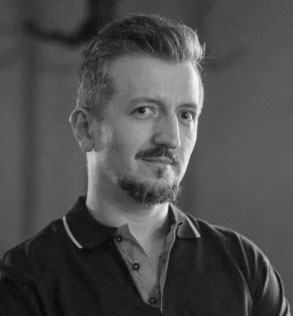 Csaba Székely (1981, Marosvásárhely) is a playwright, screenplay writer. His first play Do You Like Banana, Comrades? (Szeretik a banánt, elvtársak? ) won the best European play regional Prize at the BBC’s International Radio Playwriting Competition in 2009 followed by the Imison Prize of the British Society of Authors. His most well-known work, the Mine District Trilogy (Mine Flower, Mine Blindness, Mine Water) (Bányavidék Trilógia: Bányavirág, Bányavakság, Bányavíz),) bluntly presents Transylvanian village life; the pieces were successfully staged in many countries. He often writes about ethnic conflicts, cultural differences, minority and majority affairs. These works include MaRó, presenting the Romanian-Hungarian relations, the historical comedy Michael the Brave (Vitéz Mihály) or the tragicomedy, Joy and Happiness (Öröm és boldogság). But poverty, vulnerability and isolation are also recurring themes. These themes are emphasized for example, in his piece “10” telling the story of ten lonely people, which is currently on stage in Radnóti Theatre. He was the screenplay writer for series three of the HBO’s series Terápia, he wrote the “Sándor” episodes.