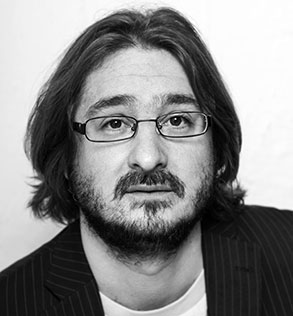 András Cserna-Szabó (Szentes, 9 March 1974 –) József Attila Award (2010) recipient Hungarian writer and journalist. He was the Student at the Faculty of Arts at Pázmány Péter Catholic University between 1992-1997. Since 1997 he has regularly published short stories, essays and culinary pieces. Between 1998 and 2000 he edited the prose column of ’Dragon Grass’ (Sárkányfű) literary and art journal. Between 1998 and 2002 he worked as a senior associate and editor of Hungarian cuisine (Magyar Konyha), a journal of gastronomy. Between 2006 and 2009 he was chief editor of Unit magazine. As of 2012, he has been the editor of the literary journal Hévíz.